Please register below for the online event Women of Europe Awards, 2020 Edition.

We encourage you to join the discussions on Twitter using the hashtag #WomenofEurope. You can also follow the event organisers @EMInternational & @EuropeanWomen.

This year celebrates the Women of Europe Awards’ fifth anniversary. Indeed, the Women of Europe Awards were launched in 2016, to highlight the contribution of women in promoting and advancing European issues, and to increase the involvement of women in debates about Europe and its future. While the role of women in the European project remains largely unrecognised, the awards aim to acknowledge and showcase their inspiring initiatives which lend a voice to women across Europe and defend European values such as democracy, inclusion and diversity. 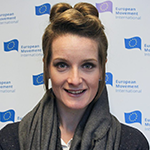